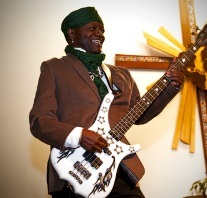 MARSHALL “ROCK” JONES, bass player with the OHIO PLAYERS died on Friday May 27th in Houston, Texas. He was aged 75 and had been suffering from cancer, though cause of death was confirmed as a stroke.

His daughters Donna Williams and Charlotte Phillips announced the news on various internet sites adding, “We appreciate all of the support and prayers. We lost not only a father, a grandfather and an uncle, we lost an icon to the community and an icon to his family.”

Born in Dayton, Ohio Jones was a founding member of the band way back in 1959 when they were called the Ohio Untouchables. In 1967 they morphed into the Ohio Players and peddled their own particular brand of funk. He was with the band right through their heyday playing on all their major hits like “Fire,” “Love Rollercoaster,” “I Wanna Be Free,” “Pain,” “Funky Worm,” “Skin Tight,” “Honey” and “Sweet Sticky Thing.” Known also for their auto-erotic album covers, the Players claimed to be the biggest funk band of the mid 70s but in the late 70s they began to flounder. Drug abuse and tax investigation seemed to sap the band’s energy and creativity and the wealth the members acquired quickly dissipated.

The group split but reformed several times in various forms but they never again achieved their 70s heights.

Leader of the current line-up of the Ohio Players, James “Diamond” Williams tweeted that Jones will be missed and he said he will be pushing for a Dayton street to be named for the Ohio Players while some members are still living.