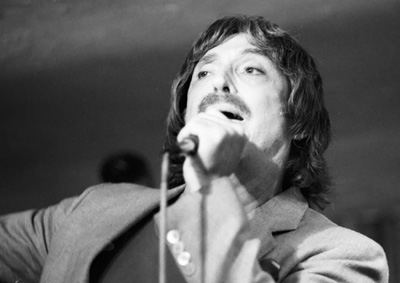 Jazz vocalist MARK MURPHY died on Thursday 22nd October at the Lillian Booth Actors home in Englewood, New Jersey. He was aged 83 and had been ill for some time.

Born in 1932, Murphy was brought up in Syracuse, New York, where he was discovered by Sammy Davis Jr. in 1953. He made his solo recoding debut in 1956 with ‘Meet Mark Murphy’ and over a lengthy career he issued 40 long players and was nominated for a Grammy on six occasions.

For a time in the 60s he lived in London and worked as an actor. Unconnected, his ‘It’s Like Love’ became a mod favourite in and around the London clubs. In later life he also spent many happy months in London. He was regularly seen at Dingwalls in Camden – whose jazz sessions he wrote and recorded a song about.

Amongst Murphy’s best-known recordings are ‘Nat King Cole Songbook Vol. I and II’, ‘Living Room’, ‘Satisfaction Guaranteed’, ‘Beauty And the Beast’, ‘Stolen Moments’, ‘Night Mood’ (an album of songs by Brazilian composer Ivan Lins) and the Grammy-nominated ‘September Ballads’. His last solo release was in 2013, for London based vinyl-only label Gearbox Records. Murphy was also featured on a 2015 release from vocal quartet London / Meader / Pramuk / Ross called ‘The Royal Bopsters Project’. He made cameo appearances on four songs including Horace Silver’s ‘Señor Blues’ and Freddie Hubbard’s ‘Red Clay’, both of which he has previously recorded.

British jazz entrepreneur Gilles Peterson posted on Twitter saying, “Devastated to hear of the passing of a dear friend, the great Mark Murphy. There throughout our entire journey, a leader and a teacher. RIP”