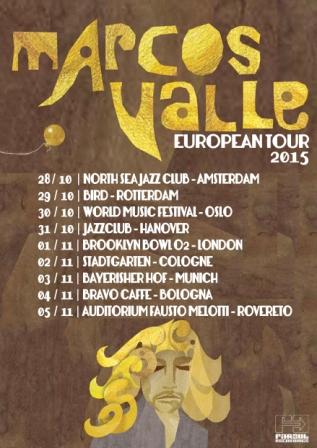 Brazilian music maestro, MARCUS VALLE is just about to set out on a European tour. Between the end of October and early November he’ll be visiting key European venues playing his very special brand of Brazilian Carioca music.

The tour coincides with a limited edition vinyl repress of his now sold out 2010 album ‘Estatica’ via Far Out Recordings. The album (produced by Daniel Maunick , son of Incognito’s Bluey) has been in-demand for some time chiefly because of the fame of Valle classics like the orchestral ‘Novo Acorde’ and the samba classic ‘Vamos Sambar’,

Valle’s music, of course, has often been referred to as the perfect mix of romantic bossa nova and pop typified by his classic ‘Summer Samba (So Nice)’ . Valle fans will also know that in a long career he’s collaborated with people like Leon Ware, Sarah Vaughan, Chicago, Jay Z, Bebel Gilberto and a certain Frank Sinatra.