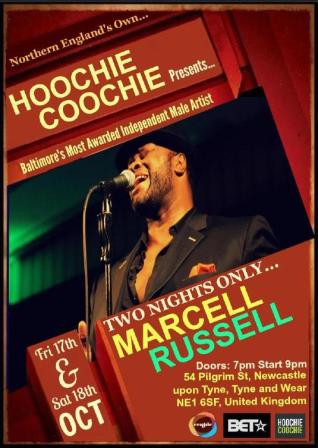 As October looms, just time for a timely reminder for what promises to be one of THE soul gigs of the year… and for once this show’s not in London!

Baltimore-based Russell is one of America’s biggest indie soul draws and is currently appearing in a Luther Vandross and Grover Washington tribute show. Marcell has enjoyed an eighteen year career and has been nominated for over 20 independent music awards. He first came to prominence fronting the group, The Truth and proper soul connoisseurs number their ‘Hopes Too High’ as an all-time classic.

A star on the US indie soul circuit, Russell is constantly likened to Luther Vandross, Levi Stubbs, Donny Hathaway and Gerald Levert while those who have witnessed his powerful performances understand why fellow soul stars have dubbed him “The Voice”.

Hoochie Coochie Club owner, Warren Thomson is a long time fan of Marcell and is delighted to be bringing him over for the two shows. He says; “Marcell Russell is a phenomenal soul singer and so that everybody can come along and witness the shows the admission charge each night will be just £5. I want the whole UK soul fraternity to come along and see this guy”.