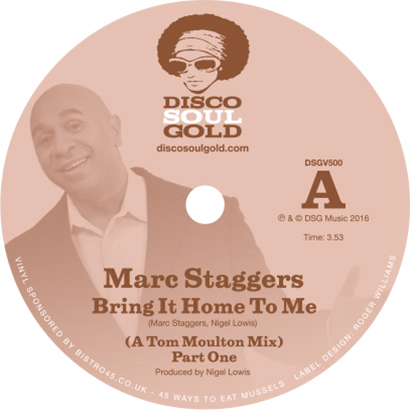 Most of the modern soul fraternity would agree that 2016’s best tune (so far, of course) is MARC STAGGERS’ DSG release ‘Bring It Home To Me’. It’s ridden high on all the credible soul charts … and little wonder as it perfectly married the contemporary with the retro (in this case, classic Philly) and who’d argue that Marc’s voice is a thing of beauty. The whole thing’s like a cross between the best of Luther Vandross and classic Lou Rawls.

And that good news has just got better, because April sees the release of the song on a very limited edition (just 300, we’re told) 7″ vinyl single and the mix for the single has been done by a certain Tom Moulton! As ever, Mr M doesn’t meddle… he just emphasises the best bits, extends the breaks and adds a quite dramatic ending. Like in the old days the song is split across the A and B sides as parts 1 and 2, but remember it’s a limited edition…. first come first served!