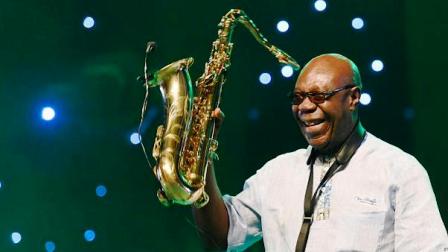 Coronavirus claimed its first victim from the world of soul, jazz and funk when the death on March 24th of African sax star MANU DIBANGO was announced. Aged 86, his social media said that he died in Paris after contracting Covid 19. There was no mention of other underlying health issues.

Born in Cameroon, Dibango will forever be remembered for his 1972 hit ‘Soul Makossa’ – a delicious fusion of jazz and funk music with traditional sounds from his home country. Dibango’s other achievements include major collaborations  with icons like Herbie Hancock , Fela Kuti, Angelique Kidjo and Youssou Ndour. He also filed a lawsuit in 2009 saying Michael Jackson had stolen a hook from his ‘Soul Makossa’, for two tracks on the then world’s best-selling album, ‘Thriller’. Jackson settled the case out of court.