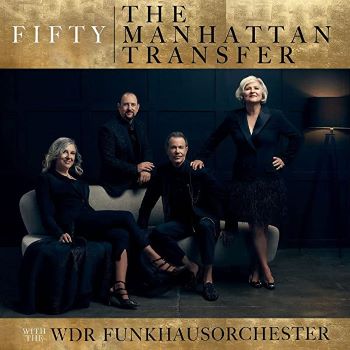 THE MANHATTAN TRANSFER are celebrating their 50th anniversary this year and in time honoured fashion they are marking the occasion with a new album, aptly called ‘Fifty’. The collection is “new” but not quite! You see the award winning group have decided to revisit some of their best-loved songs and re-record them with brand new arrangements and settings. To make these new versions really different,  the team have recorded with Germany’s renowned WDR Funkhausorchester Köln (WDR Radio Orchestra Cologne), plus symphony arrangers including GRAMMY® Award winners Jorge Callandreli and Vince Mendoza, as well as vocal arrangers including Amanda Taylor of säje.

So expect exciting and orchestrally lush versions of things like ‘Chanson D’Amour’, ‘Twilight Zone / Twilight Tone’ and ‘The Man Who Sailed Around His Soul.’ But to really tempt investigation, the album also includes two songs new to the group – George and Ira Gershwin’s ‘The Man I Love ‘and The Beach Boys’ “God Only Knows’ – the harmonic beauty of that latter perfectly suited to sound of the Transfer.

In his notes, group co-founder Alan Paul explains the choice of song… “We wanted the choice of songs to somehow represent the significant transitions of our music over the span of five decades, which was a rather formidable task. What interested us was choosing material that either represented a significant moment in the group’s history, or songs that perhaps were not necessarily hits, but ones we really loved. Also, another major consideration was choosing songs that we felt would inspire and work well with the symphony because this was a collaboration.”

Sadly, no room for ‘Soul Food Go’ or ‘Spice of Life’, but what you do get across the ten tracker is those sweet and lovely trademark, jazz-infused harmonies, dynamic, committed  performances, lush, symphonic sounds and a real stylistic range. The album comes complete with  brand-new liner notes from co-founder Alan Paul, who reflects on The Manhattan Transfer’s enduring career and longevity.

The Manhattan Transfer’s ‘Fifty’, is set for release on September 23rd digitally and October 21st on CD, via Craft Recordings. The group have also announced they will embark on their final worldwide tour with a performance at London’s QEH on November 24th, 2022