MAN IN THE MIRROR 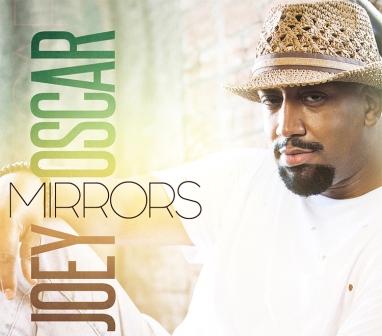 JOEY OSCAR is a drummer/percussionist who hails from St Louis. His job right now is playing in the band that works for Daystar Television Network, an award winning, gospel and faith-based network that spreads their message 24 hours a day, seven days a week – all around the globe!

Joey has also been working on his own music projects and earlier this summer we were treated to a five track EP, ‘We Are One’. Sonically it ticked all the right contemporary soul boxes and given Joey’s background there were messages in his music. Now for reasons never best explained Joey’s released a fourteen track long player that oddly, I think, contains the five tracks from the previous EP. Maybe the EP was meant to be a taster… I don’t really know. What I do know is that ‘Mirrors’ (for that is the name of the album) extends the range of that EP with its subtle gospel messages (which can be applied to secular situations too, of course) and its throughoughly contemporary American soul/R&B sound though some may baulk at the overuse of electronic effects.

Joey is the drummer, of course, but he flexes his vocals throughout. Possessor of a soulful vocal, hear it at its best on the busy, bustling ‘Good Times’ and ‘True Love’ which was probably the best cut on the aforementioned EP. The album also offers up some instrumentals –mainly short interludes; on one of which ‘Unspoken’, Mr O allows himself to show off his drum mastery.