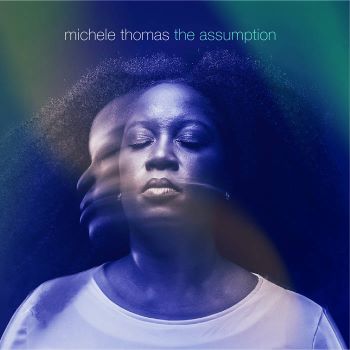 MICHELE THOMAS is a Chicago based jazz singer. A stalwart of the Windy City’s jazz scene, she’s about to release her third album ‘The Assumption’ (due March 25th) which was recorded thanks to a major local crowd funding project – a measure of the esteem she’s held in on the Chicago scene.

On the surface, the 11 tracker looks like a traditional vocal jazz album. Track wise, there’s a mix of originals and covers and a cursory listen will allow you to think of people like Ella Fitzgerald, Dianne Reeves and Carmen Lundy. Don’t make too many assumptions though (see what we did there!); this album isn’t quite as “traditional” as you might think. For starters, let’s look at the covers. You might expect a selection from the great American songbook. But no! Ms Thomas casts her net far and wide – so sit back and enjoy her interpretations of things like Blind Faith’s rock standard ‘Can’t Find My Way Home’ and the rarely covered Hubert Laws/Jon Hendricks song ‘No More’ (lovely Rhodes solo on that,by the way, courtesy of Chris Mahieu). The  best-known of the covers is probably Ivan Lins’ ‘Love Dance’ on which Michele proffers a respectful version. Less “jazzy”, if you like, is one of the album’s focus cuts – ‘I Know Because You Told Me So.’ Written by Michele and Damian Espinosa, it’s sweet and laid back  but maybe more Jill Scott than Ella Fitzgerald.

The album’s title, by the way, comes from  the set’s theme – “how we perceive trust in various relational situations, from familial ties to intimate connections, to how we interact and view the government. So, The Black Lives Matter movement looms large I as do notions of sexism, and even, subtly, the very idea of what is jazz music”.