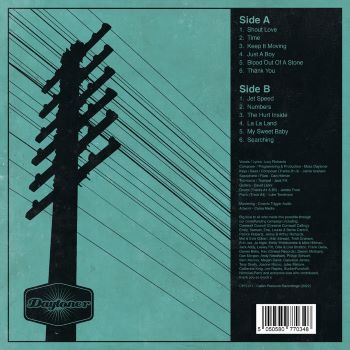 DAYTONER is a UK soul and funk band based in that soul hot bed- Cornwall!  The sextet are marshalled by  Dj/producer/general good guy muso Moss Daytoner. He first put the band together to play the festival circuit and over the years the band have become a popular live draw. Then, of course, “you know what” put paid to the live shows – even to band members getting it together to sort out new songs and musical ideas. So, like almost everybody else, they embraced the tech and via Zoom and videos they did manage to make some new music which attracted the attention of the local press. Sensibly, Moss and the band have now decided  to put the 12 new creations out there for everyone to enjoy  and what better name for the album collection than ‘Remote Connections’. The vinyl edition is already on sale while the general release to streaming/download/CD is tomorrow , June 10th.

Funk is the order of the day on tunes like ‘Time’, ‘Blood Out Of A Stone’ and ‘Thank You’ while ‘My Sweet Baby’ visits Northern soul territory. The album offers ballads too – ‘Just A Boy’ is a dramatic builder while ‘The Hurt’ echoes the music of places like Muscle Shoals and Memphis. The album artwork, by the way, features a graphic design of Marconi’s radio masts at Poldhu Cove at the turn of the 20th century, connecting this remote release to Cornwall’s history of pioneering communications technology that began with the telegraph cables at Porthcurno and continued with the satellites dishes at Goonhilly through to the Spaceport of today. So now you know and if you need to know more go to https://www.facebook.com/daytoner