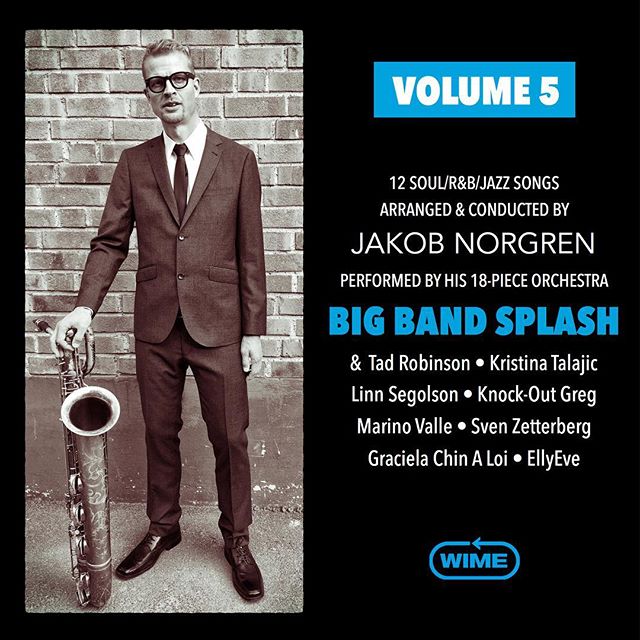 JAKOB NORGEN is a Swedish jazz musician. The sax man originally fronted his own “Jakob Norgren Orchestra” but in the mid 2000s his band adopted a more soul based repertoire and they began releasing albums under the “BIG BAND SPLASH” banner.

Covering soul and blues classics, the band’s swinging arrangements won them plenty of fans –all impressed with the big, brassy, innovative perspectives on familiar songs.

JAKOB NORGEN’S BIG BAND SPLASH has just released their fifth album – imaginatively titled “Big Band Splash Volume 5”. The 12 tracker follows the formula of previous releases – i.e., exciting new takes on classic soul and blues tunes. Amongst the selected items here are Solomon Burke’s ‘Down In The Valley’ and Otis Redding’s ‘That’s How Strong My Love Is’. Other tunes come from the repertoires of people like Etta James, OV Wright, Otis Rush and BB King.

There’s also a surprising cuckoo in this musical nest – a cover of Beyonce’s ‘Suga Mama’. Soundwise, it’s in the same style of the rest of the album – busy, bustling, and soulful, with a jazzy undertow. Vocalist on the cut is Graciela Chin A Loi – one of the many top Swedish artists who grace the album alongside US blues man Tad Robinson who fronts Jimmy Hanna’s 1967 soul rarity ‘Baby Don’t Lose Your Cool’.

BIG BAND SPLASH VOLUME 5 is out now on Wime Records and via all he usual digital platforms.