MAKIN’ ME SAY IT AGAIN… 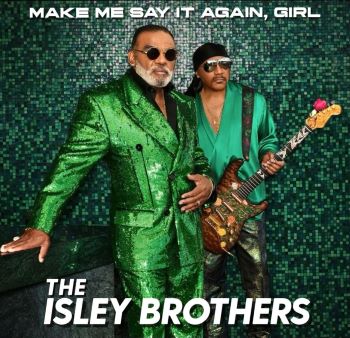 THE ISLEY BROTHERS (well actually Ron and Ernie as they’ve been for some time) have just released a new album…. ‘Make Me Say It Again Girl’ named for the single of that name which has been available for a while. You’ll know that the sensual groove features Beyoncé and is a reworking of a song from the Isley’s old ‘The Heat Is On’ LP (1975) . The single was spaced out over two parts but here on the LP, you get the full Monty… almost 8 minutes of late night grooving. For an 81 year old, Ron seems to have plenty of stamina!

The album’s other previous single is the breezy, summery groove, ‘Friends And Family’. The  message is about family bonds  and friendship links but what makes the cut so damn catchy is the lovely, gentle steppers rhythms and Ron’s still magical voice. There’s also input from good ‘ole Snoop Dogg .

And that still-lovely voice and the inclusion of rap are the hallmarks of the album. Indeed for the conservative purists there might just be too much rap input from people like Rick Ross (‘Biggest Bosses’), Quavo (‘Keys To My Mind’) and 2Chainz (‘The Plug).

The blinkered will probably skip those cuts and go to the more “traditional” tunes, like ‘Long Voyage Home’ (a sort of sequel to ‘Voyage To Atlantis’ with some biting guitar from Ernie)  and ‘There’ll Never Be’ which has cameos  from El De Barge and the remnants of EWF. Like the overall soundscape, these are downtempo  cuts aimed at what Ronald sees as the group’s core audience – the “grown & sexy”.

What is remarkable about this album is that the Brothers Isley (albeit just two of ‘em) are still producing relevant music, almost 70 years since they started out. Ron and Ernie may no longer be twisting and shouting but for sure they can still deliver!