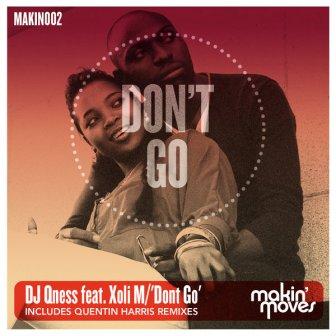 MAKIN’ MOVES is a London-based events promotion company who have just launched their own record label – imaginatively called Makin’ Moves – and they’ve just released their first material – two inspiring soulful house tunes that will keep heads nodding and feet tapping right through till 2013.

First up is a South African tune called ‘Don’t Go’. The musician is DJ QNESS with smooth vocals from XOLI M and the cut comes in two mixes (Reproduction and Dub) from New York’s QUENTIN HARRIS who keeps things moving with his signature, heavy synth bass lines.

Makin’ Moves’ second song is ‘Just Fine’ from London producer SMI. Here the vocal comes courtesy of Croydon’s very own SHEA (who has her own album out early next year, by the way). Again there’s two fine mixes – one from DAVID HARNESS and the other being the JIHAD MUHAMMAD DRUM REMIX. Both are mellow and hypnotic and will satisfy the more sophisticated clubbers (a growing breed, we’re told!)

Find out more by tuning to The Makin’ Moves Radio Show every Saturday @ www.housefm.net