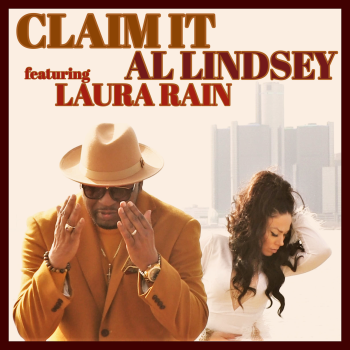 AL LINDSEY is a veteran US soul man who, though born down in Virginia, actually began his singing career in Detroit. Al’s a lifelong friend of Lawrence Payton Jr (son of the famed Four Top, Lawrence Payton), working with him on many occasions. Over here Al is probably best remembered for his ‘Versatility’ album from which ’Cotton Candy’ became a soul chart success.

For his latest single Al has teamed up with fellow Detroit singer Laura Rain (currently hot with ‘Closer To The Win’) on a big ballad ‘Claim It’. We’re told that the pair first met via the magic of social media and we don’t know whether the duo actually worked together in the studio on the song but, for sure, there’s a real soulful chemistry about the recording. Detroit (mainly via Motown) has delivered some mighty fine soul pairings and the teaming of Al Lindsey and Laura Rain is another the Motor City can be proud of. Out now!