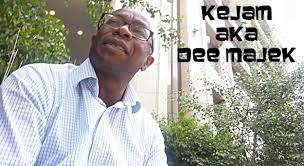 Regular visitors to www.soulandjazzandfunk.com will know that for quite some time we have been championing the music making of UK soul entrepreneur DEE MAJEK. Through 2016, using his KEJAM alias, Dee’s issued a slew of quality modern soul which he’s promoted with a tireless enthusiasm and commitment to his art.

All the hard work seems to be paying off. The Kejam long player, ‘Kejam/Majek’ is right now nestling in the Japanese pop charts while tracks from the album are regularly playlisted all over Japanese radio. Japan, by the way, was one of Dee’s focus markets.

Dee/Kejam is also making inroads Stateside. The Kejam song ‘2 Can Play’ (featuring great vocal from Terry Harris) is now officially the number one steppers record across America while three more Kejam tunes are starting to pick up air and club plays.

So, a good year for Majek/Kejam and with new music planned for early 2017, looks like the next 12 months will be just as rewarding!