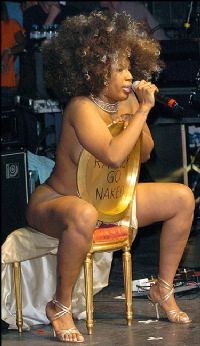 MACY GRAY has her brand new album, ‘The Sellout’, released on May 17th through Concord Records/Island Records. ‘The Sellout’, the artist’s first new record in over three years, features 12 new songs and was co-written and executive produced by GRAY in Los Angeles throughout 2009. The album was mixed by four-time Grammy Award winner MANNY MARROQUIN whose credits include top 10 singles for LADY GAGA, JAY Z, RIHANNA, ALICIA KEYES, KANYE WEST and JOHN MAYER and collaborators on the album include T.I., BOBBY BROWN, THE BODYROCKERS, KAZ JAMES and SLASH, DUFF MCKAGAN and MATT SORUM formerly of GUNS N’ ROSES and VELVET REVOLVER. MS. GRAY says, “The Sellout tells the story of how I found my salvation in just being myself instead of who other people thought I should be. I had got to a place in my career where I tried everything that was asked of me and in doing so I lost sight of who MACY GRAY really is. I spent over a year making this album without any pressure or opinions and being able to choose the co-writers, producers and artists that felt good to me. As a result, it really reflects my true identity. I feel like I have finally made the album I was capable of and that my fans wanted. These are some of my favourite songs that I’ve written.” We’ll find out if they’ll become our favourites too in May.