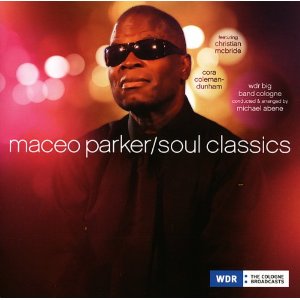 Veteran alto sax maestro MACEO PARKER – who will be 70 in February – returns with a new live CD called ‘Soul Classics.’ It’s the former James Brown sideman’s take on some soul music evergreens by the likes of his former employer (the Godfather of Soul’s ‘Papa’s Got A Brand New Bag’ and ‘Soul Power’), Stevie Wonder (‘Higher Ground’ and ‘I Wish’), Isaac Hayes (‘Do Your Thing’), Aretha Franklin (‘Rock Steady’), Harold Melvin & The Blue Notes (the Gamble & Huff-authored ‘Yesterday I Had The Blues’), and Larry Graham’s Sam Dees-penned ‘One In A Million You’). Parker leads a trio that features stellar jazz bassist Christian McBride and drummer Chris Coleman-Dunham in addition to orchestral accompaniment by the WDR Big Band Cologne conducted and arranged by Michael Abene (Parker and the big band had previously collaborated on 2007’s ‘Roots & Grooves’). The album’s out now via the German Moosicus label.

For more info go to: http://maceoparker.com/