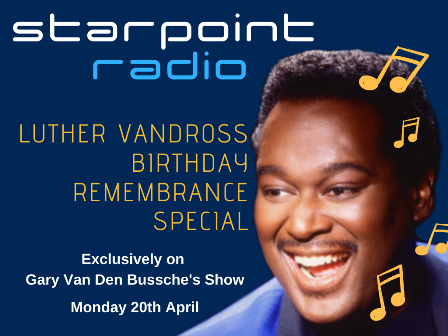 It may have escaped your attention, but Monday 20th April was LUTHER VANDROSS’ birthday… he would have been 69. To mark the occasion, STARPOINT RADIO broadcast a very special tribute show. Produced and hosted by GARY VAN DEN BUSSCHE, it skilfully told Luther’s story and included archive audio from Luther himself alongside friends like Dionne Warwick.

It goes without saying that the music was exceptional… plenty of Luther classics, lots or rarities, rarely played album tracks and examples of his work as a session singer. There’s even a Luther-inspired ad break.

There are plenty of top class music podcasts around to keep us occupied during the lockdown, but if you’re a Vandross fan, a fan of classy, sophisticated soul and/or just what to remind yourself about what his passing deprived us of, then this is essential fare. You can access it via the Starpoint site.