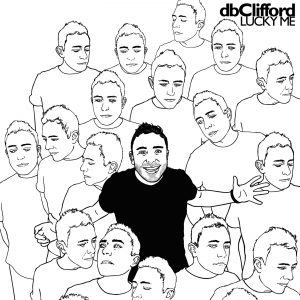 db CLIFFORD (his spelling, by the way) is a London-based singer/songwriter who’s been in the business since the early noughties. He’s released a couple of albums – his last being 2011’s ‘Feet Above The Ground’ from which the single ‘New State Of Mind’ won the John Lennon Award for best pop song.

Since then db’s been gigging and preparing his new album ‘Lucky Me’ which gets release on Smadhi Music on April 13th. In truth, the 16 tracker is more contemporary pop than classic soul – blue-eyed or otherwise. However a selection of the cuts do have a definite soul flavour….. ‘Beautiful Night’, ‘Weekend Love’ and ‘Looking For No One’ have a real Southern soul feel with gritty guitar and punchy brass that recalls the might Hi sound. Blue-eyed soul fans could do worse than to check ’em out… especially that last one.