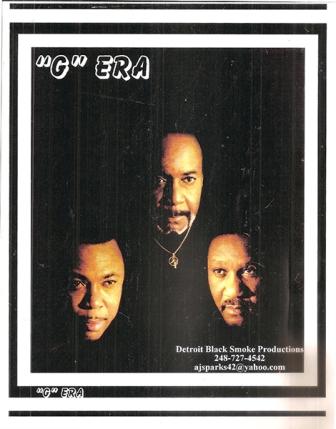 G’ERA is the odd but current working name of a Detroit band who were formerly called Bernard Gibson and Liv-N-Proof.

Mr Gibson has a long music pedigree. In 1974 he formed his very first group – The Expos. Made up of Bernard, his brothers Arthur and Willie, brother in law Anthony Pilgrim and a friend Lucien Thompson, they cut one single for Detroit’s Stall label. Then as the Exportations they recorded a whole LP for United Artists and a pair of collectable singles for Vir-Ro.

By the end of the 70s the group were using the Liv-N-Proof name and recording for Ju Par though to complicate matters Bernard also sang with Five Special (managed by Dramatic, Ron Banks). He was so well thought of in and around Detroit that he also worked with various incarnations of the Floaters, the Jacksons and Dennis Edwards Temptations Review.

After the deaths of his brothers and brother in law, Gibson formed G’Era with Gregory Palmer and Douglas Gaddy and the trio went on to cut a couple of songs for A J Sparks Detroit-based Black Smoke Productions.

Both songs – a beaty, Temptations style ballad ‘Loving You’ and a harmonic ‘Making Love’ (more Temptation flavours) – have just been licensed by UK soul specialist, SOUL JUNCTION RECORDS and they’re now available as a limited edition 7″ single. Both songs are a real throwback to Detroit’s Golden Era – a fact underlined by the fragile falsetto of Douglas Gaddy on ‘Loving You’. It bears a remarkable likeness to a certain Eddie Kendricks!