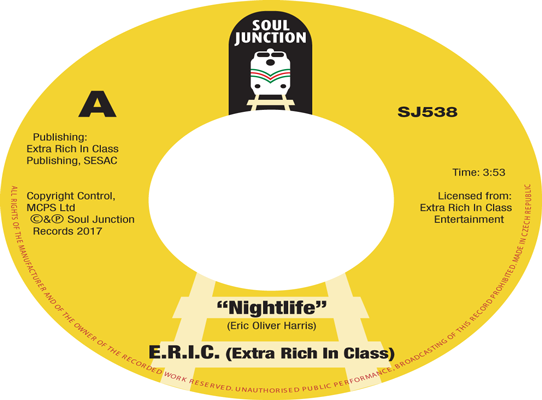 Soul connoisseurs are all aware of E.R.I.C. (Extra Rich In Class), the performing alter ego of soul man ERIC HARRIS. Eric works out of New York and his recorded legacy to date consists of a series of themed EPs which evoke the spirit of the classic soul of artists like Luther Vandross, Bill Withers and Barry White. His 2011 outing ‘Betcha Didn’t Know’ won him lots of fans in Europe while his song ‘The ATM’ (possibly the only song about the hole in the wall?) showed the man’s background in banking and his penchant for the quirky.

Last year his ‘The Nightlife’ EP kept his fans well happy, with one track – the sweet dancer ‘Nightlife’ garnering loadsa love. Cutting to the proverbial chase, UK modern soul reissue specialist, SOUL JUNCTION RECORDS have licensed the tune and released it on a lovely vinyl 45 and ‘Nightlife’ has lost none of its magic. Great stuff! As a bonus, the B side shows a different side to Mr Harris. The Soul Junction people have opted for the more balladic ‘Backstage’ as the flip. Originally issued in 2013, it shows why E.R.I.C is in such demand as Luther V tribute.