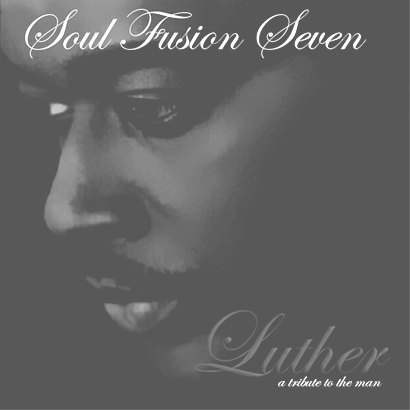 Serious soul connoisseurs will know a little bit about SOUL FUSION SEVEN. The team comprise bassist/songwriter John Saltwell and lyricist Paul Baker. In 2014 they hooked up with some session players to craft a busy, jazz-tinged modern soul groove, ‘Steppin’ Up My Love’. It became a big tune that year… no. 1 in the Amazon NU soul chart, no less while it graced a few tasty compilations. The vocal was minimal but the anonymous singer did offer a flavour of Luther Vandross….

Now guess what? Soul Fusion Seven’s follow up features a new Luther soundalike  (duetting with a female) in a heartfelt tribute to the self same Mr Vandross. The song is simply called ‘Luther’ and it’s a sad and stately homage to the great man, name checking many of his hits en route. It’s very different to ‘Steppin’ Up My Love’ but that’s one of its attractions.

Both tracks we’re told will feature on a later in the year album, ‘Acquittal of the Ego’ but in the meantime ‘Luther;’ is available on DSG Records from May 13th.