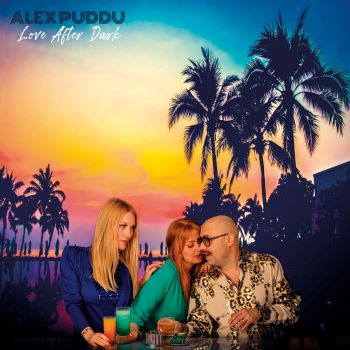 Italian soul and jazz multi-instrumentalist ALEX PUDDU has been promising us  a new album for  some time. While we’ve been waiting for the set, Alex has released a series of singles from it to serve as a sort of taster. So, we’ve enjoyed tunes like the retro throwback groove ‘Lady Tonight’, the catchy ‘Adult Games’, the laid back ‘Shadow Dancer’ and the smooth but soulful ‘Body Heat’. All channelled a 70s/80s vibe –  touches of jazz-funk, a sprinkle of sophisticated Philly, disco sweeps and grown-up soul music.

At long last the parent album has been released and it’s called  ‘Love After Dark’ which Signor Puddu tells us is his homage  to the  nightlife of the late 70s and early 80s. So, no wonder that those singles sounded as they did – they fitted that mission statement perfectly.

The newly unveiled tunes develop the 70s/80s theme with the instrumental ‘Chains Of Love’ catching ears right now with its sumptuous MFSB feel. ‘The Long Road’ and ’We Got The Feeling’ have a blue-eyed soul flavour while if you like things a little slinkier there’s ‘Strangers on the Beach’ (Simone Miller at the mic again). For something a little different, ‘Catch The Wave’ offers a reggae jaunt – Funmilayo Ngozi on vocals here.

‘Love After Dark’ was recorded In South Florida at DogManic Recording Studio. It was  Engineered by Jason ‘Jedi ‘Sedawie and mixed in Germany by Rob Hardt, so there’s real soul pedigree going on. Out now on Al Dente Records.