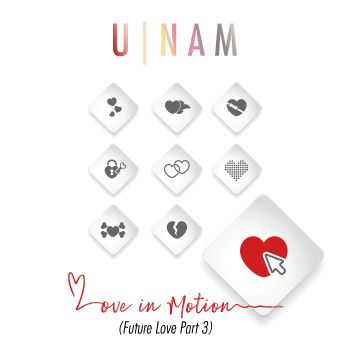 The busily prolific U-NAM (guitar star EMMANUEL ABITEBOUL) continues his ‘Future Love’ series of albums with a third episode, due May 28th. The new album is called ‘Love In Motion’ and U-Nam says that the concise 8 tracker “continues to use the creative process to purge the emotions and relieve the tensions that, from the debris of a complicated divorce, had threatened to engulf me”.

Sonically the album follows the template of the first two editions of ‘Future Love’. That’s to say the music is classy, guitar led smooth jazz with a soulful undertow and plenty of Benson-esque jazzy flourishes. Some of the cuts are tougher and funkier than other (‘Miss Funk’ is the obvious example) while others, like the album’s title cut are more laid back, sensual even.

The set’s focus cut appears to be the opener, ‘Whizz Kid’ – a breezy and tight groove that encompasses everything we’ve come to expect from U-Nam. The radio edit of the tune closes down the album.

‘Love In Motion’ also offers a “bonus” track – U-Nam’s version of Buffalo Springfield’s ‘For What It’s Worth’ which he recorded in duet form with the late Ronny Jordan. The track originally appeared  on the  ‘Cool Guitars volume 2’ but good to hear it in this new context.