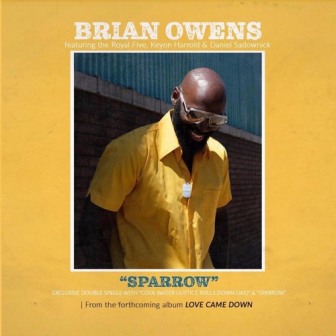 Though he had several successful albums behind him, we first got to know and love Missouri soul man BRIAN OWENS via his remarkable ‘Soul Of Ferguson’ album. It was followed in 2017 with what on the face of it was an oddity – Brian’s homage to country legend Johnny Cash. On it, the singer nailed the connection between country music and soul – notably via his own song, ‘Soul In My Country’.

The good news is that Mr O is putting the finishing touches to a new long player – ‘Love Came Down’ which was recorded down in the famous Royal Studios in Memphis under the auspices of Boo Mitchell and producer Brian Michel Bacchus.

Though there is no definite date for the release, Brian has just released a double A sided single as a taster. One of the songs is a lazy, jazzy meander ‘Cool Water’ – it clocks in at a remarkable ten minutes plus and the feel and atmospheric will add weight to soul commentators who have already likened Brian Owens’ whole music approach to Marvin Gaye’s. And, as if by coincidence, the single’s second song is a cover of a Gaye tune – ‘Sparrow’, a song that first appeared on Gaye’s ‘Here My Dear’. Both songs feature jazz trumpet virtuoso Keyon Harrold, percussionist Daniel Sadownick and a star Memphis rhythm section comprised of Peter Martin, Jon Cowherd, Steve Potts, Sherrod Barnes and Stephan Crump…. “The Royal Five.” Both tracks available now.