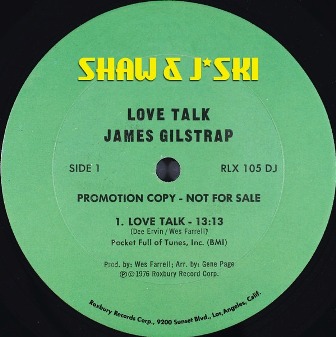 Here’s a real blast from the past! Hope you remember JAMES GILSTRAP. His biggest (only?) hit was, of course, ‘Swing Your Daddy’ but, as a top session singer, he worked with plenty of big names. None bigger than Stevie Wonder. Gilstrap actually sang the first verse on ‘You Are The Sunshine Of My Life’… so his is the first voice you hear on ‘Talking Book’ (Remember that for the pub quiz!).

In 1976 he released what was his second solo album ’Love Talk’… a typically, lush 70s affair produced by Wes Farrell with arrangements by the incomparable Gene Page. The LP didn’t do too much and young Jimmy went back to sessions – notably in the UK with Elike Brooks.

As is the way, it seems that the epic ‘Love Talk’ LP title track (it clocked in at over 13 minutes!) enjoyed some success on the rare groove scene and now it’s back with us in a re-tweaked and re-mixed form from Martin Shaw  and Jay Negron under their Shaw & J*Ski brand. This “”new” version clocks in at just over six minutes and the duo wisely keep that fabulous Gene Page everything in the mix arrangement… check out the wonderful intro! Out now!