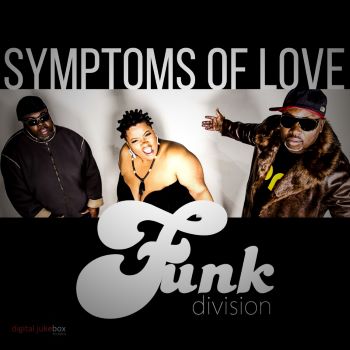 FUNK DIVISION is a soul outfit from the UK’s West Midlands. Fans of a certain vintage might know them as Sound Garden… but in 2013 the “gardeners” morphed into Funk Division, feeling that the new moniker best summed up their sound. The trio then comprised Mark Anthony Duffus, Derek King and vocalist Samantha Pearce and they debuted with ‘What You Want’. They went on to enjoy further success with Tell Me Something’ and ‘The Things I Said’ with a vocal from new girl, Fiona Paulwell-Thindel.

For their latest single, a soulful ‘Symptoms Of Love’ Funk Division feature a new female lead, Xiomara Mukwendi. Ms Mukwendi has been working with the band for a few years, but, of course, the pandemic and all that brought put paid to any real action! So, the optimistic ‘Symptoms Of Love’,  which tell us to “express our love”, is the FD’s sort of “comeback” release. And what a great comeback… a tight groove, soulful vocals, and a simple, effective message.

FUNK DIVISION’S ‘Symptoms Of Love’ will be released 21st June.