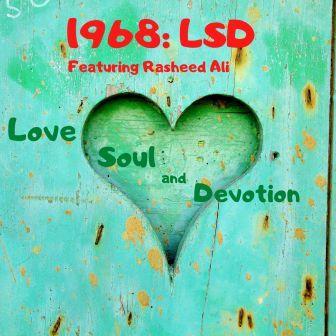 Over the past few years US musician RASHEED ALI has established a reputation as one of the most intriguing and provocative artists on the contemporary soul scene. Working as “1968” (essentially Rasheed and his nephew Emile Martinez on trumpet… Rasheed is keen on the band concept), he uses the soundscape of golden age soul music (think James Brown, Norman Whitfield, Curtis Mayfield, Sly Stone et al) to deliver powerful messages in the music. He began with a critically acclaimed trilogy of LPs that explored issues like civil rights, roots, heritage and the role/concept of women in society. En route he issued the powerful single, ‘A Badge And A Gun’ – his response o the violence against Afro–Americans citizens by trigger-happy US police.

That song was one of the focal points on 1968’s fourth album, ‘The Other Side Of Town’ which again took us back sonically to the late 60s. Once more though, there was plenty to provoke – like ‘Be A Man’ – a challenge for us all to stand up for what we know is right.

Mr A has just released the fifth album in the series… ‘LSD… Love Soul And Devotion’ which he tells us is “most likely my last 1968 album…because I truly believe I said all that I wanted to say in the genre of Soul Music”. For a last bow, though, the set is still terrific! Sound wise, Rasheed stays true to the 1968 vibe and over the 13 tracker you’ll hear all kinds of sonic references without being able to pin things down too accurately. For instance ‘It’s So Good’ has all the punch of EWF while ‘You Gotta Have Faith’ sounds to have taken its reference point as dear old Curtis Mayfield’s ‘Move On Up’ .

As the title of the set proclaims, ‘LSD’ is mellower and more romantic than what’s gone before in 1968’s odyssey. Amongst the key tracks is ‘Love Can Make You’. Built around the line “love can make you sing a different tune”, it indicates – as is patently the case – that ‘LSD’ contains a wealth of “different tunes” (different to the previous more incendiary albums, that is). Why!…. there are even a few proper Quiet Storm moments… like the haunting ‘Angel’ and the regretful ‘I Don’t Have Any Pictures’.

Rasheed believes that “love will always survive”- an exemplary and optimistic note with which to end this musical chapter. But what next for him? He tells us: “I have a strong desire to realize my “Modern Classical Music” ideas….Some of that resembles “Jazz Group with Symphony Orchestra” type of vibe….like Claus Ogerman. It will be whatever occurs to my spirit but I can tell you that I want to create some music that is quieter, more cerebral, more to my strength as a composer of instrumental music.” … something for us all to look forward to!