LOVE ME FOR REAL! 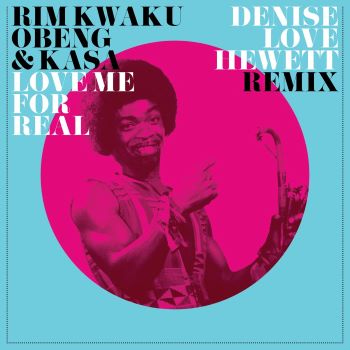 RIM AND KASA was the recording name of Ghanaian drummer, RIM KWAKU OBENG. In the 70s he came to the States to work as a session drummer but also recorded his own music  – most under that Rim and Kasa moniker.

Maybe his most famous outing was a 1981 EP, ‘Too Tough’ for Sum Sum records. It meant little outside fans of tough disco but (you can guess) originals are now fetching big bucks with one tune ‘Love Me For Real’ being particularly desirable.

Step in bbe Records who’ve re-released it last year and now they offer a hard-hitting remix of the track by the L.A. duo of Denise Love Hewett and Yung Spielburg who both first heard the track on the soundtrack to the 2019 movie ‘Big Time Adolescence’. Hewett and Spielberg’s version makes great use of  swirling synths, catchy vocals and the Latin Afro-Disco vibe which has made ‘Love Me For Real’  so collectable. It’s hard hitting and the message in the music is ultra contemporary – a  theme of female empowerment and mutual respect between sexes