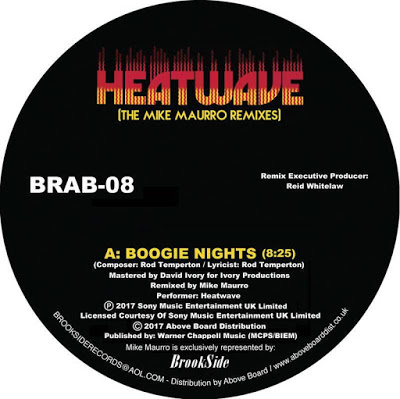 Brooklyn’s MIKE MAURRO is, by common consent, one of the music biz’s best mixers. Inspired/mentored by people like Arthur Baker, John Robie, Afrika Bambaataa, John “Jellybean” Benitez, The Latin Rascals and “Little” Louie Vega, Mike’s mixes are always in demand and those he does produce tend to sell out and then become hugely collectable.

The latest band to get the “Mike Maurro treatment” is UK soul and funk outfit HEATWAVE. Mike has re-worked four of their very best…. ‘Too Hot To Handle’, ‘The Groove Line’, ‘Boogie Nights’ (of course) and the evergreen ballad ‘Always And Forever’. Together they form a great tribute to an often underrated band and more particularly their song writer, Rod Temperton.

Taking a lead from the legendary Tom Moulton, you’ll know that Mike doesn’t tamper too much with the original tracks. He knows that with great music you don’t need gimmicks; rather, he picks the best parts, the catchy hooks, the memorable lines and extends and highlights them. On the Heatwave tunes he utilises some previously unheard studio ad-libs and instrumentation to create some mighty fine extended vinyl. The Heatwave mixes are released on the 29th September through Juno. The demand is sure to be massive.