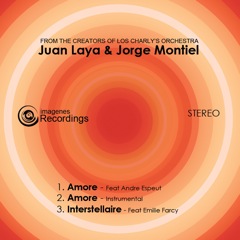 Those of you who long for the allure of the glitter ball will be glad to know that the key people behind Los Charly’s Orchestra are working hard to recreate the best of that well-loved musical era.

Juan Laya and Jorge Montiel, who lead Los Charly’s Orchestra, a London based collective, whose inspiration is the spirit and the sounds of New York City in the late 60’s and 70’s, have just produced a disco-heavy EP which will be released very soon.

The EP’s lead tracks are ‘Amore’ and ‘Interstellaire’ and both are crafted in the very best tradition of Salsoul and Philly-inspired disco.

‘Amore’ features a great Barry White style vocal from Andre Espeut, and crate diggers will note the tune’s similarity to work by artists like Aquarian Dream. ‘Interstellaire’ is different again. It features the Parisian singer Emilie Farcy whose sultry spoken words take the tune to another level.