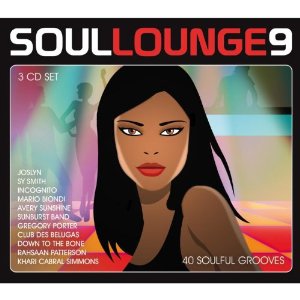 Dome Records have just released their ninth SOUL LOUNGE collection and like the first eight, this one’s stuffed with the very best of contemporary modern soul. As ever the collection comes on three CDs and amongst the 40 tracks there are a few that are new to CD. These include the CLUB SURREAL Mix of INCOGNITO’S ‘Ain’t It Time’, KHARI CABRAL SIMMONS’ take on KEANE’S ‘Is It Any Wonder’ and SKI OAKENFULL’S remix of another INCOGNITO track – their in-demand version of EDDIE RUSS’S Jazz funk classic ‘Zaius’.

Other in-demand items include the SY SMITH/RAHSAAN PATTERSON collaboration ‘Night (Feel Like Getting Down)’, the wonderful VRS remix of BEVERLEI BROWN’S ‘Somebody Knows’, MARIO BIONDI’S ‘This Is What You Are’ and, re-confirming it as one the era’s biggies, GREGORY PORTER’S ‘1960 What’ (here in the Opolopo Kick and Bass Rerub). Amongst the old favourites is the DRIZABONE remix of lovely LULU’S ‘There Has Got To Be A Way’ … and speaking of DRIZABONE the album includes their ‘All The Way’ from the their 2010 DRIZABONE SOUL FAMILY set.

Yes, every flavour of modern soul is represented here and at a budget price for over 3 hours of classy music, you can’t go wrong!