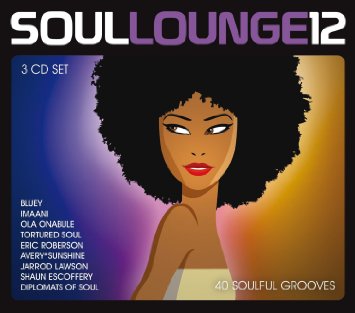 DOME RECORDS’ excellent ‘SOUL LOUNGE’ series reaches its 12th edition with another 3CD box that is stuffed with the very best modern soul. Like the previous 11 instalments, this new collection brings together the cream of recent releases, adds a few choice oldies and garnishes it all with some surprising remixes of old favourites.

Here for the first time on CD is the acclaimed Opolopo remix of Jarrod Lawson’s ‘Sleepwalkers’. It’s right alongside the remix that brought the ever-dependable Ola Onabule rightly back into the spotlight… the Nigel Lowis mix of his ‘Soul Town’. Another included, sought after remix is DJ Spen and Gary Hudgins’ tweak of Shaun Escoffery’s ‘People’. Mr Escoffery – another 2015 comeback kid- is also represented by an acoustic version of ‘Bridge Over Troubled Water’, while fans of Bluey and Incognito will be delighted by the inclusion of ‘Tale A Chance On Me’, ‘Lowdown’ (with Mario Biondi and Chaka Khan on vocals), and ‘Life Between The Notes’.

Other recent goodies include ‘Tortured Soul’s ‘I’ll Be There For You’, Eric Roberson’s ‘Just Imagine’, JD7’s ‘Believe In Love’ and the Diplomats Of Soul’s ‘Brighter Tomorrow’ – both of those last two with input from that man Bluey again. You also get one of the year’s most acclaimed soul cuts – Aaron Parnell Brown’s still lovely ‘Just Leave’.

Amongst the oldies, there’s Brenda Russell’s ‘It’s A Jazz Day’ from 2003, Conya Doss’ 2006 ‘Find A Way’ and ‘Touch My Body’ from Cooly’s Hot Box’ still sounding good after almost 11 years. The oldest tune on offer is Hil St Soul’s ‘Free Spirit’. Released way back in 1999, it still sounds fresh and contemporary and it fully complements all the recent cuts.