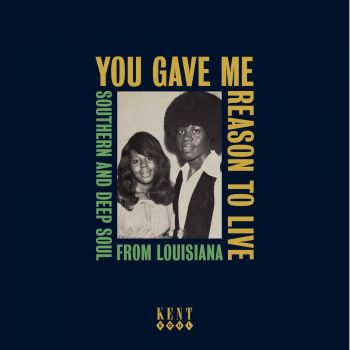 Musically, the sleepy, swampy country areas of the Southern state of Louisiana are  famed for their  Cajun and Zydeco heritage – products of the people (French Arcadians and black slaves) who settled in this remote corner of the “Land Of The Free”!

However, as communications developed (trains, roads, radio, TV) the good folk of rural Louisiana were exposed to other sounds – notably soul (Memphis and Houston weren’t that far away, relatively speaking, and New Orleans was a magnetic hub) and local music biz entrepreneurs started to record the state’s ambitious soul singers. Sadly, ambition doesn’t always lead to success and  rural  Louisiana didn’t produce any major soul “names”. (Of course, here we’re factoring New Orleans out of consideration. The Big Easy has always been an anomaly!)

For their latest compilation, Ace/Kent records have trawled the archives of small, indie Louisiana labels to offer a snapshot of Louisiana soul in in the 60s and 70s. The collection is ‘You Gave Me The Reason To Live’  and its named for the Big Daddy Green song that anchors the 22-track set. The song sums up the flavour of the album – rough and rustic, deep soul offered by artists clearly influenced by people like Wilson Pickett and Otis Redding. Expect no big names here. Most famous artist on offer is probably Bobby Charles who cut the original version of the massive Bill Haley hit ‘See You Later Alligator’. On this collection his tune is a simple and sweet ‘Big Boys Cry’.

Amidst the other featured artists are Charels Green, Ike Porter, Lee Bernard, Freddie Love and Sticks Herman whose charming ‘Lonely Feeling’ was cut in 1961 and is the earliest tune here. It was released by Tic Toc. Other sourced labels include Anla, Goldband, Soul Unlimited and Hub City and the extensive notes will tell you all you need to know about these tiny labels and obscure singers.