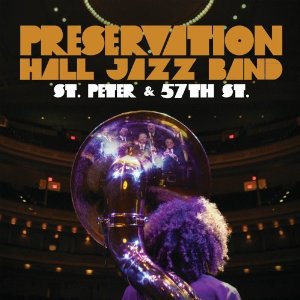 New Orleans’ Preservation Hall is one of the Crescent City’s most iconic jazz venues and this year it celebrated its 50th anniversary. As part of the celebrations the Hall’s house band – THE PRESERVATION HALL JAZZ BAND – decamped to New York for a special awareness and fund raising concert. The show took place at Carnegie Hall and featured an array of special guests which included GEORGE WEIN, MARK BRAUD, THE DEL McCOURY BAND, TIFFANY LAMSON, MOS DEF, THE BLIND BOYS OF ALABAMA and the great ALLEN TOUSSAINT. The programme was a celebration of traditional New Orleans jazz and did much to underline the cultural significance of that particular genre… critics and audience alike were unanimous in that the music embodied “the timeless spirit of the musical and cultural traditions of New Orleans”.

Rounder Records have just released a live recording of the concert. Entitled ‘St Peter and 57th Street’ (the Hall’s address), it properly captures the spirit of the evening and indeed the true musical heritage of New Orleans. The album is available now.