LOOK WHAT U DOIN’ 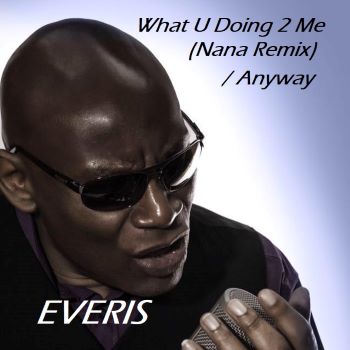 EVERIS (Pellius) may not be a name too familiar to you but he’s worked with plenty of big names and my guess is that the serious modern/contemporary soul collector will have some Everis music somewhere in their collections.

He’s worked with (amongst others) The Jones Girls, the JTQ, Jocelyn Brown, Kym Mazelle, Mica Paris Gabrielle, Don‑e, Kenny Thomas, Omar and someone called Cliff Richard! His writing/production  credits include tunes for The Jones Girls, Wayne Marshall, Chico, Aswad, The Beat Masters, Home Boy Hippy, Carl Cox, Deborah Bell, and Shaila Prospere. He’s popular in France too – he enjoyed a no. 1 there in 2001 fronting Superfunk on ‘Last Dance’. Properly busy, our man also composes film and TV music, works on music for ads and does voice overs! More recently Everis has collaborated with Georgie B and his mighty Groove Association!

Right now though Everis is making big waves on his own with the tune ‘What U Doing 2 Me’. It’s a big and bright outing with bags of energy and impact. The original mix first grabbed the plaudits but now it’s the “Nana” mix that’s creating a real buzz. Using a sample from McFadden and Whitehead’s ‘Pushed Aside’, it’s rightly scaling the credible soul charts.

The B side is something quite different – it’s a soulful cover of Terry Garmon’s reflective gospel ballad ‘Anyway’. It was recorded live in Paris with his band Karltone (we said he was “big” over there!) and shows  why Everis is held in such esteem by the knowing soul community. All three tracks are from an upcoming album which we’re looking forward to.