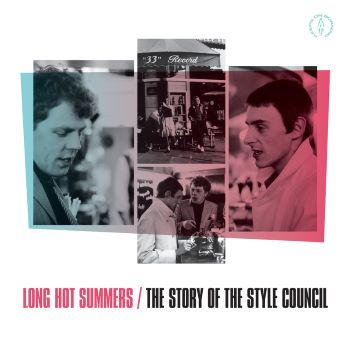 Everyone knows that PAUL WELLER is a soul boy at heart. He once told me that his favourite record of all time was Curtis Mayfield’s ‘Move On Up’ but a few years later in another interview he’d changed it to the Winstons’ ‘Colour Him Father’. Whichever one you go for, it shows the man’s impeccable music taste and so, in many ways, it was logical that when the proto punk of the Jam had run its course he would  take his music in a more soulful direction. And that’s just what he did with THE STYLE COUNCIL.

Oddly, the Style Council has never been given total respect by the serious po-faced music press and the broadsheets that pander to the chattering classes. How wrong they are! The Style Council produced a catalogue of songs every bit as good as the Jam’s and easily equal to Wellers’ later solo output. Sure, the Style Council’s sound was a tad smoother than the Jam’s and much of what Weller created later but it was always as audacious and as driven by social consciousness as anything Weller ever crafted before or after the “Council”.

Check out that assertion via a brand-new Style Council retrospective, ‘Long Hot Summers’ – named, of course, for the collective’s biggest hit. All the band’s other hits are here (they enjoyed 12 top 20 hits) alongside key album cuts as well as 2  unreleased tracks –  a demo version of ‘Ever Changing Moods’  complete with strings and a 5 minute version of ‘Dropping Bombs On The White House’  which despite its title is a breezy instrumental that shows Weller’s respect for the sound of vintage Blue Note.

The collection has been co-complied by Paul Weller. He also writes the introduction to Lois Wilson’s sleeve notes which also feature input from self-confessed mod/soul boy/actor Martin Freeman. There’s also a slew of rare photos and all the music’s been lovingly re-mastered.

‘Long Hot Summers’ will be available digitally as well as on double CD and triple album vinyl: limited editions of both vinyl formats: black vinyl and a highly covetable coloured vinyl version will be available. Released date is 30th October.