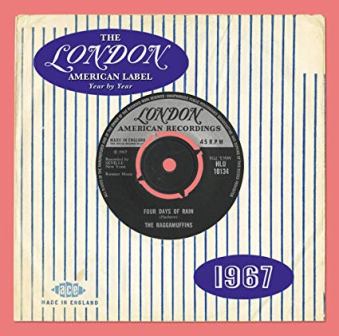 UK collectors’ label Ace Records continue their excellent examination of the old London American label with a new 28 track trawl of that label’s output for 1967.

Older soul folk will recall that London was a subsidiary of the UK Decca label and it was set up to source and release American music to the UK market. Indeed, London was one of the first UK labels to issue Motown product, but label managers cast their nets far and wide and rewarded the British public with plenty of fine music across all kinds of genres.

Ace has already issued 11 London compilations chronicling the label’s contribution to British pop culture and the new 1967 edition offers as many rewards as all those previous 11. Soul fans will be delighted to have easy access here to things like O V Wright’s ‘Eight Men Four Women’, Erma Franklin’s ‘Big Boss Man’ and the Falcons’ Wilson Picket –led ‘Billy The Kid’. They can also ‘Boogaloo Down Broadway’ with the Fantastic Johnny C , do the ‘Humphrey Stomp’ with Jerry Kay, revel in the rarity of Donald Height’s ‘Three Hundred and Sixty Five Days’ and enjoy Brenda and the Tabulations’ collectable weepy ‘When You’re Gone’. Perhaps the rarest soul outing is Freddie Scott’s cover of Van Morrison’s ‘He Ain’t Give You None’. Those titles underline the taste that the London American bosses had – choosing and having faith in records that might never have seen the light of the UK day. Sadly their faith wasn’t always rewarded and if you own original London 7s of those tracks you have something mightily collectable on your hands!

London, though, wasn’t just a soul outlet. The label issued masses of classy pop, cute MOR, raunchy R&R and rockin’ country. Best of the pop outings here is the Associations’ classic ‘Never My Love’ – inexplicably never a UK hit. Amongst the country stars is Charlie Rich though anoraks will know that his ‘Love Is After Me’ is Rich’s attempt to crash the soul market. It’s a Cropper/Hayes/Porter song and was recorded in Memphis for Hi. Like most of the cuts here, the original London single is now worth big bucks. Now you can enjoy it – and lots more – for a very reasonable investment!