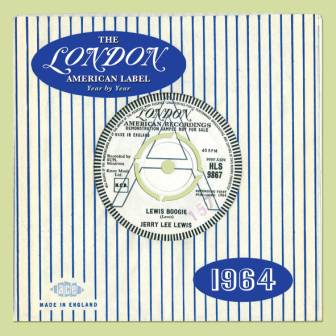 Ace Record continue their wonderful series on the London label with a 28 tracker that chronicles the UK based label’s American output in 1964. 1964, of course, was the high point of the UK beat boom and Brit bands dominated the American charts but American stars gave as good as they got while some even tried to ape the British sound. .. try THE CHARTBUSTERS ‘She’s The One’ – a spirited rocker based on THE BEATLES ‘I Saw Her Standing There’.

In ’64 Soul was starting to fly too and the collection features some fabulous vintage soul. Highlights include LOU JOHNSON’S ‘Message To Martha’, THE DRIFTERS’ ‘One Way Love’, BEN E KING’S ‘Around The Corner’ and JIMMY HOLIDAY’S ‘I Lied’. Amongst the other featured soul stars are THE CRYSTALS, TOMMY TUCKER, SOLOMON BURKE, THE COASTERS, OTIS REDDING, and WILLIE MITCHELL and the album ends with LOUIS ARMSTRONG’S ‘Hello Dolly’ which makes you wonder at his amazing musical odyssey… from pioneering, underground innovator in the 20s and 30s to beloved MOR entertainer in the 60s.