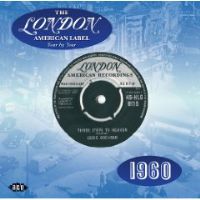 How appropriate that in the year Motown is celebrating its fiftieth anniversary, we should also have the opportunity to celebrate the importance of the London American label – the first UK label to issue Motown product. Ever-dependable Ace records have just embarked on a new series that will chronicle, year-by-year, the part played by London in making American material more easily available in the UK. London American was a subsidiary of the old Decca label and issued its first British releases in 1949, but it was in the mid fifties that the label came into its own by licensing material from the scores of American indie labels that had sprung up in the rock’n’roll era. London American offered rock, blues, R&B and pop-starved Brits real, hard-to-find American gems from labels like Liberty, Dot, Jamie, Speciality, Imperial, United Artists, and even Atlantic, Chess and, of course, Motown. The first Ace London compilation focuses on 1960 and includes MARV JOHNSON’S ‘I Love The Way You Love’ which though recorded by Motown was released in the States by United Artists. Other featured tracks include CHUCK BERRY’S ‘Let It Rock’, ‘Tiny Tim’ from LAVERN BAKER, ‘All I Could Do Was Cry’ by ETTA JAMES and ‘Save The Last Dance For Me’ by the DRIFTERS. The new album is the first in what will surely prove to be an important series for collectors across all genres.