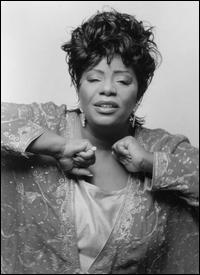 Chicago-born soulstress LOLEATTA HOLLOWAY has died following a brief illness. She was 64. News agency reports –confirmed by her manager, RON RICHARDSON – say that she died on Monday 21st March and that the cause of death was heart failure.

Like many great soul stylists HOLLOWAY developed her technique through singing gospel – in her teens she was part of a family group, THE HOLLOWAY COMMUNITY SINGERS before joining ALBERTINA WALKER’S CARAVANS. She made her secular solo debut for the Apache label in 1971 with a cover of GENE CHANDLER’S ‘Rainbow’; from there she moved to GRC where she recorded two albums. The title cut of her second set – the SAM DEES-penned ‘Cry To Me’ was to furnish her with her biggest solo hit.

Her next label was NORMAN HARRS’ Gold Mind’ and from her debut set another SAM DEES’ ballad – ‘Worn Out Broken Heart’ enjoyed chart action. But the fast paced flip side – ‘Dreaming’ – won enough air play to dent the pop charts and Ms HOLLOWAY was reborn as a disco artist. As a solo artist and fronting THE SALSOUL ORCHESTRA (Gold Mind was swallowed up by the Salsoul label) she was an ever-present on the dance charts as singles like ‘Hit And Run’ and ‘Love Sensation’ became staples in discos worldwide. It’s also LOLEATTA’S searing vocal on DAN HARTMAN’S disco smash ‘Relight My Fire’ and it’s those dance floor classics which secured her iconic status in Europe and Japan.

After Salsoul folded LOLEATTA HOLLOWAY recorded for a number of labels and though direct chart action proved elusive, records which sampled her work did become hugely successful – the most notorious being BLACK BOX’S ‘Ride On Time’. The Italian band used LOLEATTA’S vocal without any credit – indeed they went so far as to coach model CATHERINE QUINOL in the “art” of lip-synching. Ms. HOLLOWAY went on to successfully sue the group.

LOLEATTA HOLLOWAY’S sudden death has taken the music business by surprise. She leaves behind four children and nine grandchildren and a private service for the family and a public memorial at REV JESSE JACKSON’S church in Chicago are due to be held