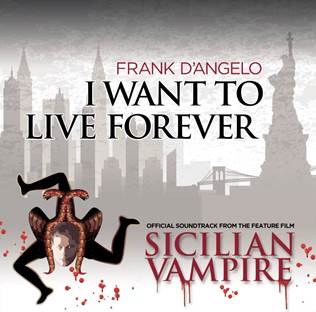 FRANK D’ANGELO (no, no relation to you know who!) is a new name to us, but in his native Canada he a leading light in their soul and R&B scene where his own YOUTUBE channel has scored over four million hits. He also fronts a late night TV show – ‘The Being Frank Show’ – where guess have numbered Al Pacino and Tony Bennett.

Frank began his musical career in the 80s fronting a band called Toronto which peddled soul an R&B across the States and Canada. His current band is a 15 piece and his shows, we’re told, are sell-out affairs.

His latest project is the theme tune to a new movie, ‘Sicilian Vampire’ which stars James Caan, Daryl Hannah and someone called Frank D’Angelo. The song is lovely four minutes worth of retro-flavoured soul, appropriately called ‘I Want To Live Forever’. The tune sweeps along briskly allowing Frank to show off his sweet and soulful falsetto… shades of Ron Tyson!

Frank D’Angelo’s ‘I Want To Live Forever’ is available to download now.