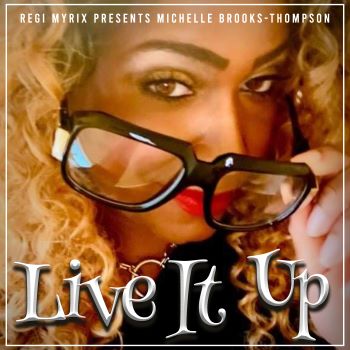 He’s proper busy is soul entrepreneur REGI MYRIX. Hot on the heels of his Nigel Lowis remix of ‘It’s A Vibe’ comes a brand new Myrix-produced tune from MICHELLE BROOKS-THOMPSON. Teaming up again with singer-songwriter Ty Juan he’s crafted a contemporary soul dancer, ‘Live It Up’ as a vehicle for the big, emotive vocals of Ms Brooks Thompson.

Michelle, you may know is a US soul and gospel singer whose powerhouse performances have earned her the nickname “the Whitney Houston of Gospel”. Over the last few years, she’s established herself quite a reputation, beginning with winning  the 2017 Apollo Amateur Night. The $20k prize was as useful as the publicity. Michelle then went onto reach the finals of NBC’s ‘The Voice’ where judge Adam Levine (Maroon 5) opined that she “possessed a supernatural singing ability.”

Hear that “supernatural singing ability” in full flow on ‘Live It Up’ which is released Friday, 19th November via Myrix Media Group and it’s so good in these troubled times to hear a new, optimistic song that simply extols the virtues of getting out an having a good time!