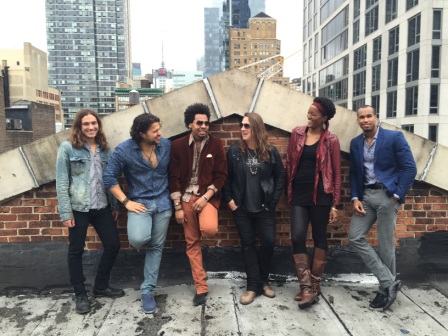 GEDEON LUKE AND THE PEOPLE may be new kids on the soul block but they’re already making an impact on those who’ve managed to preview music from their upcoming, 2015 debut album ‘Live Free And Love’. The band’s recent performance on ‘Later With Jools Holland’ and subsequent gigs have intrigued soul tastemakers so much that Gedeon and the People are being tipped left, right and centre to be one of THE bands of 2015.

Main man, Gedeon Luke was born in Memphis and steadfastly rejected the gang violence and drug abuse that surrounded him. Like many before him Gedeon looked to music, family and faith as his salvation. Having re-located to New York, he signed a deal with Monocentric Music who’ve just released the title track to the upcoming album as the lead single. The song, ‘Live Free’ is an up-tempo, unbridled, organic, old school soul romp that comes on like a hybrid of Sly Stone and Lenny Kravitz. The good news is that there are plenty more goodies on the LP. ‘Soul Child’, for instance, is a heartfelt homage to one of Gedeon’s heroes – Curtis Mayfield; ‘I’ll Be Your Friend’ is a lovely, sparse ballad; while ‘Gray’ is a great mid-tempo groove built around an annoying ear worm of a riff.

GEDEON LUKE and the PEOPLE’S ‘Live Free And Love’ will be available in early 2015 on Monocentric Music.