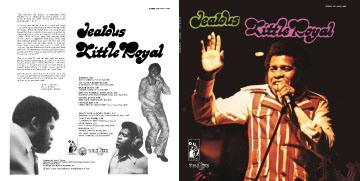 Sadly real success eluded him and he’s possibly best remembered for his claim to be the half brother of James Brown. The fact of the matter was never fully established, hardly surprising given Brown’s chaotic upbringing, but the Godfather never disputed Royal’s claim and indeed they were close friends and often worked together.

Royal also claimed to have “discovered” Teddy Pendergrass. It seems that when playing Edgehill’s Club in Atlantic City, Torrence auditioned for a drummer for his band, the Swingmasters and Teddy got the gig…. and the rest….

Little Royal, like many second tier soul artists, did the rounds of various labels but enjoyed his most successful stints at Carnival and King where he had a little success with the album ‘Jealous’ in 1972. As is often the way, he enjoyed a cult following on the UK and European underground soul scenes.