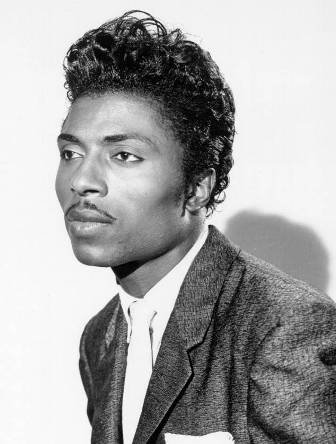 In the music biz, the words iconic and unique are wildly overused in describing artists. In truth few garlanded with those adjectives don’t merit them. In the whole canon of popular music there are probably less than a dozen who deserve those epithets… one who surely does is LITTLE RICHARD who died yesterday, Saturday 9th May. He was 87 and his family said he’d died of bone cancer in his home – Tullahoma, Tennessee.

He was born Richard Wayne Penniman in 1932 in Macon, Georgia. He was one of 12 children, and said he had started singing because he wanted to stand out from his siblings. Nicknamed, “Little” because he was born with one leg much shorter than the other, highlighting his already small stature, he reiterated, in a recent interview, that he started singing and banging on the piano simply to win attention. He left home in his teens after disagreements with his preacher/nightclub owning father who initially didn’t support his music and, said the singer, because of his (Richard’s) homosexuality.

Pursuing a music career, Richard developed a unique sound and style that was a blend of the music of his roots – gospel, R&B and blues. His unique sound coupled with his exuberant performances (aggressive vocals peppered with shrieks and yells) and flamboyant appearance meant that the hits came thick and fast. Classics like ‘Good Golly Miss Molly’, ‘Tutti Frutti’, ’Long Tall Sally’ and ‘The Girl Can’t Help It’ sold between them over 30 million copies worldwide.

At the height of his first phase of fame he quit what was now dubbed “Rock N Roll” (he called himself the “Architect Of R&R”!) to become a minister but his religious training was dogged with allegations of sexual misconduct and after  five years he was back playing the devil’s music… exploring the embryonic soul genre and for a time Jimi Hendrix was in his band. In  1970, after seeing cocaine kill his brother, Richard turned to religion again – and was eventually ordained as a minister in 1970 though he continued to record and tour. It was however his classic 50s recordings that will forever be remembered and securing for him a place in the Rock and Roll Hall Of Fame. Indeed he was one of the first inductees in 1986. (Northern soul fans revere his 60s Okeh recordings – some with Larry Williams)

I was lucky enough to see Little Richard live. It was 1964. I was 15 and took the ferry across the Mersey to see him headline a package tour in Birkenhead. The show featured (amongst others) Merseybeat band, The Undertakers and the rocker Jerry Lee Lewis. Little Richard blew them away. He was all flamboyance and exuberant energy; climbing on his piano… throwing his watch, handkerchief and cuff links into the audience. That and those ground-breaking songs left an indelible impression. He left the same impression on countless others – John Lennon freely admitted that it was ‘Long Tall Sally’ that convinced him rock and roll was the future; Paul McCartney aped Richard’s vocal gymnastics; Mick Jagger copied his stage prancing; Jimi Hendrix learn the art of stage presence; as too did Prince…the list is endless. Little wonder a plethora of big stars are lining up to pay tribute to someone unique and iconic.