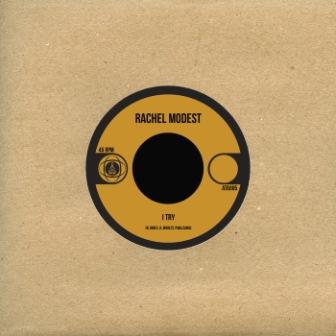 We first heard of Brit soul singer RACHEL MODEST back in 2015 when she débuted with a dramatic reading of Ben E King’s ‘I Who Have Nothing’ (also recorded of course by Linda Jones, Dee Dee Warwick, Luther Vandrosss and someone called Shirley Bassey!)

Rachel is now working on a solo LP and the first fruit is a double A –sided single … ‘I Try’/’Forbidden Love’. Released on ATA, the songs were written by label bosses Neil Innes and Pete Williams and in the production they’ve tried to capture the magical nostalgia-soaked sound of the Daptone set up.

‘I Try’ is a sparse, mid-tempo old school soul groove that builds and builds. With understated backing vocals, it sort of creeps up on you. ‘Forbidden Love’ is a much darker affair engulfed in Daptone style brass. Both cuts hark back to soul’s golden age and young Rachel turns in a convincing vocal.

Both cuts are available via ATA Records.