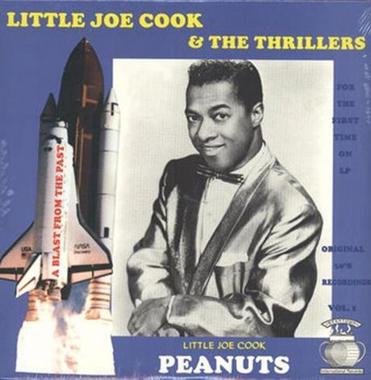 Veteran soul and R&B singer, LITTLE JOE COOK died in Boston on Tuesday 15th April. He was 91. His family said he’d died after a long battle with cancer.

Born in South Philadelphia in 1922, Cook’s most famous song was ‘Peanuts’ – a number 22 Billboard hit back in 1957 that showcased his remarkable falsetto voice. Before that he’d sang with various groups including The Evening Stars – a respected Philly gospel ensemble and on the strength of his work with them Cook was asked to replace Sam Cooke in the Soul Stirrers… an offer he declined.

In the mid fifties Cook formed a doo-wop group called The Thrillers and, signed to the famous Okeh label, they hit with the aforementioned ‘Peanuts’. The song was later to become a hit for the Four Seasons and Frankie Valli was quick to acknowledge the influence that Cook had on his own distinctive vocal style.

Joe eventually went out on his own but real success eluded him so in the early 60s he created a girl group, The Sherrys (they included two of his daughters), and they scored a hit with the novelty dance song ‘Pop Pop Pie-Pie’, a classic “girl group” sound.

Joe moved to Boston in the mid sixties where he worked sporadically in that city’s bars and clubs He enjoyed a residency at the Cantab Lounge in Cambridge, Massachusetts, from 1980 until he retired in 2007, being voted the region’s Best Local R&B Performer in 2002.

Little Joe Cook is survived by his wife Joanne and six children.

Interestingly, back in the 60s UK soul and blues singer Chris Farlowe recorded 2 songs for the UK Sue label using the alias “Little Joe Cook”. They were the blues standard ‘Stormy Monday’ and a Farlowe song called ‘She’s Alright’. They were delivered in an intense gritty, gruff style that was a million miles away from the real Little Joe Cook’s sublime falsetto, but they did manage to fool people into thinking that Farlowe/Cook was a black American singer.