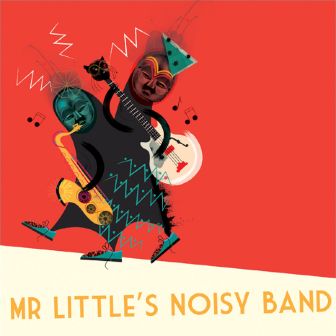 MR LITTLE’S NOISY BAND isn’t the latest creation of children’s author Roger Hargreaves; rather it’s the performing alter ego of UK muso and man about town Andy Little. Andy took up the guitar at the tender age of 8 and by 16 he was enrolled at The Academy Of Contemporary Music. However practicing a guitar for 8 hours a day was too much and he developed tendonitis. Forced to stop playing guitar for a year, he learned how to arrange for and play other instruments. Hence the first incarnation of Mr Little’s Noisy Band. Since then the band has become a real ensemble …and an ever-expanding one.

The band have just released their first EP and an accompanying video and if you investigate you’ll learn that their music is a complex, intriguing fusion of jazz and… well almost anything else!

Andy says; “A lot of people think we sound like funk but to me that’s just the conduit. The essence of the music is about jazz, and more specifically – improvisation. When a group of great musicians improvise together they listen to each other; they complement and respond to each other. This is when music becomes a method of communication, a language of its own. It becomes more than a recital.”

The band’s eponymous EP is a three tracker and with titles like ‘Narcoleptic Tightrope Walker’ and ‘Danse De Blanc’ you’ll discover you’re not in for an easy ride… but rewards reveal themselves if you stick with it. Find out more @ www.mrlittlesnoisyband.com