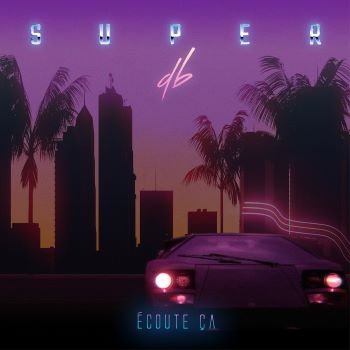 SUPER DB is a four piece band hailing  from London… twin brothers J-M Sutcliffe (Guitars & vocals), J-P Sutcliffe (Drums, vocals, keys & percussion), Lorenzo Bassignani (Bass) and Matt Dibble (Keys, vocals, sax & clarinet) and they describe their sound as “a distinctive mix of pop, disco, funk, rock and jazz” and that was indeed the flavour of the singles they’ve released over the past year or so. And it’s that trio of singles that open the band’s debut album – ‘Ecoute Ca’ (which we think  means “listen to that”).

Those singles, ‘Kool Funk’, ‘Wait For Me’ and ‘Open Line To Me’ were redolent of the 70s and 80s and the album’s 9 remaining tracks plough the same furrow. So, expect some funky bass (‘Take Me Back’ owes a lot to the  intro of Keni Burke’s ‘Rising to the Top’)  and chinking guitars à la Chic (‘Sun And Rain’). Vocally, however, the sound is the sound of the blue-eyed soul brigade… think Hall and Oates. That H&O sound is most obvious on cuts like ‘Dancing In A Rainstorm’ and ‘The Eternal Optimist’.

Sadly, band member Matt Dibble died in May  so the three remaining band members have dedicated ‘Ecoute Ca’ to his memory. They say: “Matt always brought vitality and positivity to our projects and life in general. Ecoute Ca represents everything we loved to create as a unit and its release is now as significant as ever.”